Posted at 10:23h in News by Fredrik 0 Comments
0 Likes
Share

NUI has, in collaboration with Haukeland university hospital, developted and tested a new method that can help people with COPD to exercise longer and with higher intensity by reducing the breathing resistance.

Chronic obstructive pulmonary disease (COPD) is a term used to describe progressive lung diseases including emphysema, chronic bronchitis, refractory (non-reversible) asthma, and some forms of bronchiectasis. This disease is characterized by increasing breathlessness throughout life. The disease leads to the development of physical and psychosocial sequelaes that reduces the quality of life, and reduces life expectancy. Public’s knowledge in relation to the disease extent is low, which can explain the low detection rate of approximately 25%. COPD is one of the world’s major health challenges and the fastest growing illness worldwide. In Norway about 150 000 people have COPD,  and 55 000 patients per year are treated by health care because of the disease. According to the latest WHO estimates (2004), currently 64 million people have COPD and 3 million people died of COPD worldwide. WHO predicts that COPD will become the third leading cause of death by 2030.

Why make the exercise more effective?

Physical rehabilitation is one of the most important instruments for reducing disease exacerbations and the development of secondary diseases with subsequent hospitalizations. It prevents anxiety and social isolation and increases working capacity. But during exercise COPD patients often experience limitation because of breathing difficulties. Therefore they cannot conduct training as recommended, and therefore get less benefit from training.

NUI is the initiator of this project, and based on our competence and experience from the offshore and subsea industry we have developed a method for physical rehabilitation in heliox atmosphere. This can reduce COPD patients breathing resistance during exercise so that they can train more easily and with better effect and thus reduce the negative consequences of COPD disease. There is a significant under-capacity in rehabilitation for COPD patients throughout the country. By this method, we hope that we can make the patients healthier, and increase the efficiency and capacity of the training programs and facilities in the country.

Heliox is a mixture gas composed of helium and oxygen, for example in the ratio 79% / 21%. The oxygen content is the same as in air. Helium is seven times lighter than nitrogen. In the specified mixing ratio heliox is three times lighter than air. The gas creates less turbulence in the airways. This allows heliox is significantly easier to breathe in and out than air. Gas exchange in the lungs improves, the patients develops less degree of dynamic hyperinflation, and the patients use less effort and energy on the work of breathing. One of the key factors that causes breathlessness during exercise is the development of dynamic hyperinflation. It is shown that heliox reduces the degree of dynamic hyperinflation and breathlessness and thus increases exercise tolerance.

Training in helioxatmosfære in this way is a new concept. To test the basic ideas and technical solutions we have developed and built a pilot solution. A one-man-habitat. The solution is a gas-tight room with technical solutions for continuous recycling, purification, monitoring and control of the atmosphere. 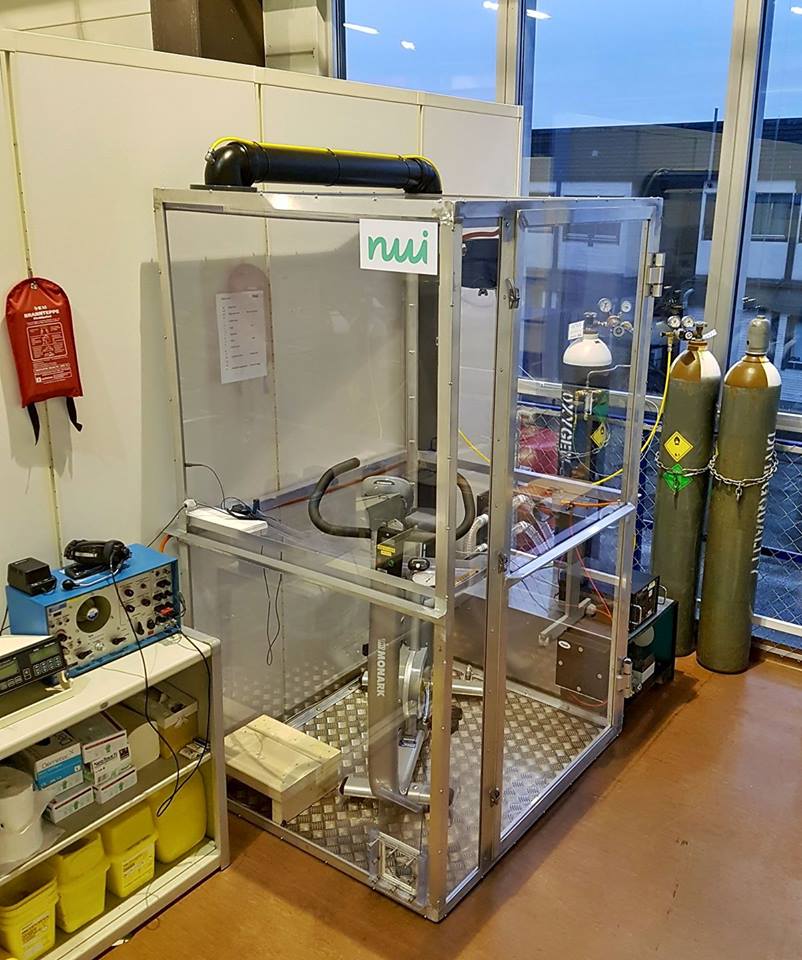 In week 4, 2016, we conducted a two-day test of the pilot solution for training of COPD patients in helioxatmosfære. Four patients who had completed physical rehabilitation at Haukeland University Hospital were tested in the pilot habitat over two days (eight sessions). They conducted the same training with the same equipment as at Haukeland, but now in helioxatmosfære. They were measured according to the physical endurance and experienced breathing resistance. 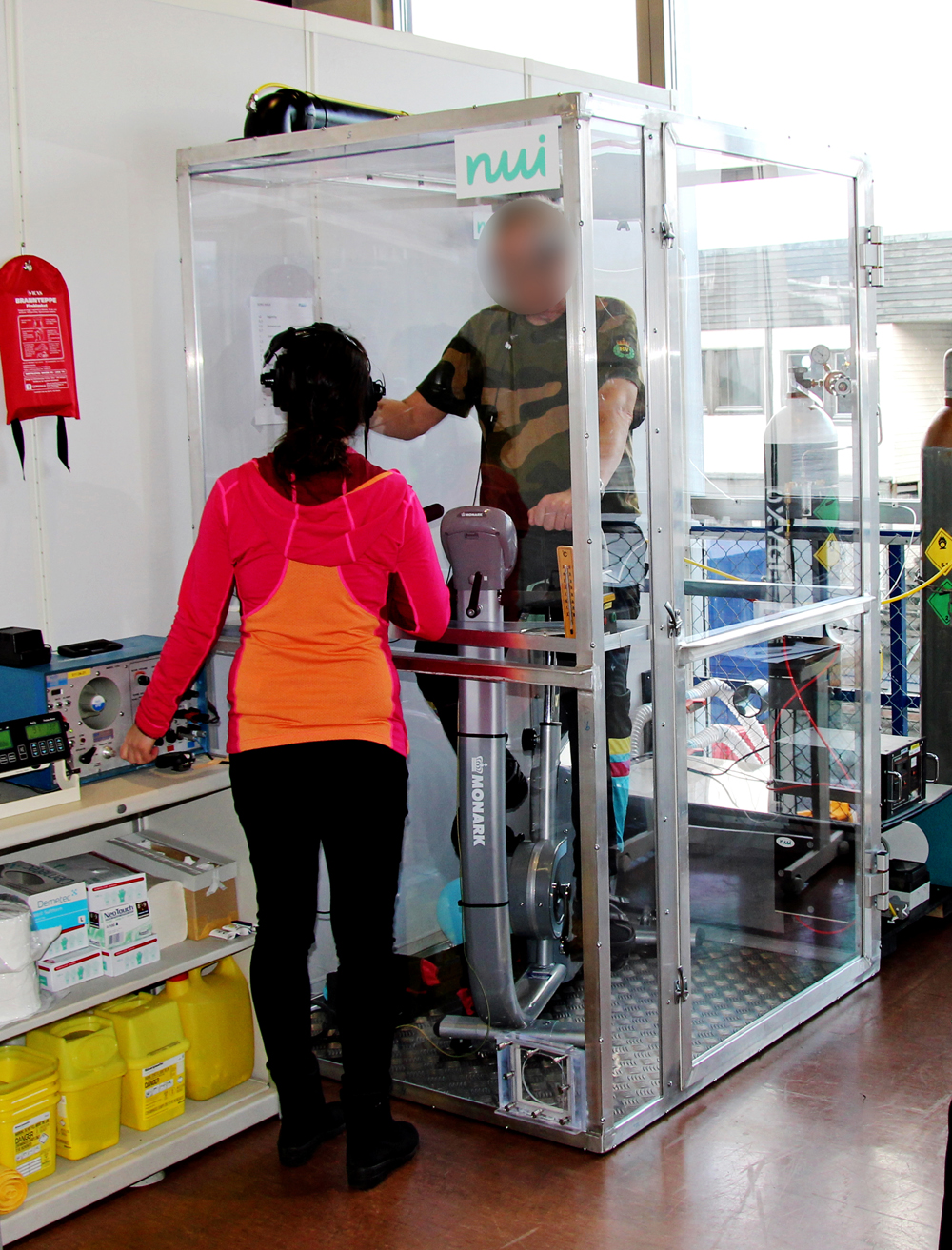 The results of the pilot test were positive. The patients felt comfortable during the exercise in the habitat. Half of the patients experienced significant relief in breathing, and felt that they could train more intervals and/or at a higher intensity. 87% of the patients scored better at the objective BORG scale, or higher intensity were recorded, compared with the results from Haukeland. This provides a good basis to develop full-scale solution with room for a larger group of patients and physiotherapists.

Hence this is a new method, the concept needs to be verified by research. We are working on obtaining funding to run a research project where we build a large gas thight habitat for a group of 8-10 patients and physiotherapists, and include 120 patients in a research project in collaboration with a research institution.

Sorry, the comment form is closed at this time.